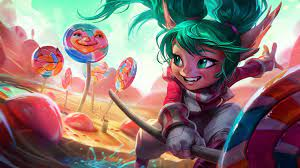 Poppy was joined the League of Legends on January 13th, 2010. She was originally designed with a hammer and shield as she is the Keeper of the Hammer! Her design has changed significantly since then however, as she not only had a few visual upgrades, but has also been completely redesigned. To mark the occasion of the Harrowing event in 2010, a fitting skin was designed for Poppy called Lollipoppy.

The main difference between this Legacy skin and Poppy’s other purchasable skins is the new ‘Oompa Loompa’ inspired character model! While there’s nothing flashy about the skin because there are no new particles, animations, or ability sounds, the new model has a refreshing aesthetic that makes you feel like you’re in the magical chocolate factory! In this skin, Poppy rocks a new hammer that’s just a giant lollipop, and the shield is a giant chocolate bar! While the skin may not initially come off as a Harrowing skin, it’s certainly a festive skin that is perfect to use for the end of the year as it works as a festive skin for Hallowe’en and Christmas! Of course, the splash art for this skin is just as beautifully colourful as you’d expect and has one happy Yordle looking like she’s running around a Candyland with her lollipop friends! In terms of the skin line that Lollipoppy belongs to, there really isn’t one; however, the skin fits in with the other candy-themed skins like Sugar Rush Ziggs, Bittersweet Lulu, Candy King Ivern, Candy Cane Miss Fortune, and Dark Candy Fiddlesticks! But, other than Candy Cane Miss Fortune, Lollipoppy is the only candy-inspired Legacy skin! 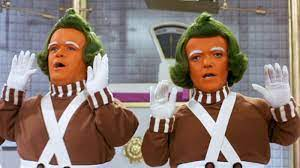 There isn’t any historical meaning behind the choice and design of this skin, but as previously mentioned, the skin is inspired by the Charlie and the Chocolate Factory story and fit’s the vibe incredibly well. Poppy already has a fun and outgoing personality that fits the mold of festive spirits so it’s only fitting that she brings down the lollipop! With this skin originally debuting in late 2010, the skin is also over eleven years old, so if you do have your hands on this skin, it’s practically historical in-and-of-itself!

Why is it a Poppy skin?

While the skin may not seem to fit into the Harrowing event theme, it’s obviously still Poppy in a costume and makes complete sense for it to be a Hallowe’en costume! Let’s be real, if Poppy were to show up at a Hallowe’en party, she would probably show up looking something like that!