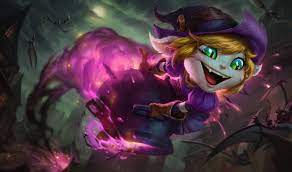 Tristana was released on February 21st, 2009 and for the biggest League of Legends fans, you’ll know that date corresponds with the initial release of the game. This manes Tristana one of the original League of Legends Champions! Tristana is designed to appeal to the rebel in all of us as she is The Yordle Gunner, she is one of the few Champions that remind us of how we were when we were young; full of energy, small, and ready to fight! As such, a “bewitching” skin suits her style; she has the delightful character of a Yordle, and the wicked energy of a witch. Obviously, Bewitching Tristana is the perfect blend of these characteristics stylistically and is just as fun to use!

Bewitching Tristana was released on October 18th, 2016 for 1350 RP. At this price, players will easily be swayed towards adding it to their cart once they get a look at this skin in game. Not only is it pleasant to watch, but it is just as smooth to play. With this skin’s release being a part of the Harrowing Event in 2016, it’s not available to purchase in the store, sadly. Instead, players have two options to get their hands on this skin if they haven’t already. Players can either wait for future Harrowing Events where these skins will likely become available again (as they have in the past) to be purchased for 1350 RP, or they can take their chances at unboxing this skin in a Hextech Chest or Mystery Gift!

Not only is this skin sought-after because of its rarity, but the character model has an incredible update with Tristana as a witch. This includes her cannon “Buster” being swapped out for a cauldron, and the witch’s hat to top! On top of that, not only does the skin rock new animations for her basic attacks, recall, and emotes, but it also has new sounds for her abilities and spells that really make playing the skin feel so buttery-smooth! When comparing this skin to Tristana’s others, this skin takes the cake for the most desirable Legacy skin. Although some would argue that Firefighter Tristana is a better design, it costs more RP and some players report it to have clunky animations, whereas Bewitching Tristana’s basic attack sounds are very satisfying and clear that kiting is generally easier on this skin. In terms of Bewitching Tristana’s splash art, it’s certainly one of the best thematic pieces. Not only are the colours beautiful, but Tristana is in the middle of blasting off after firing her cauldron “Buster” into the ground as if she’s riding a cauldron as a witch instead of a broom; all while having a huge smile on her face! When Bewitching Tristana was released, it was released as a part of thematic Harrowing skin line including Little Devil Teemo and Bewitching Morgana! 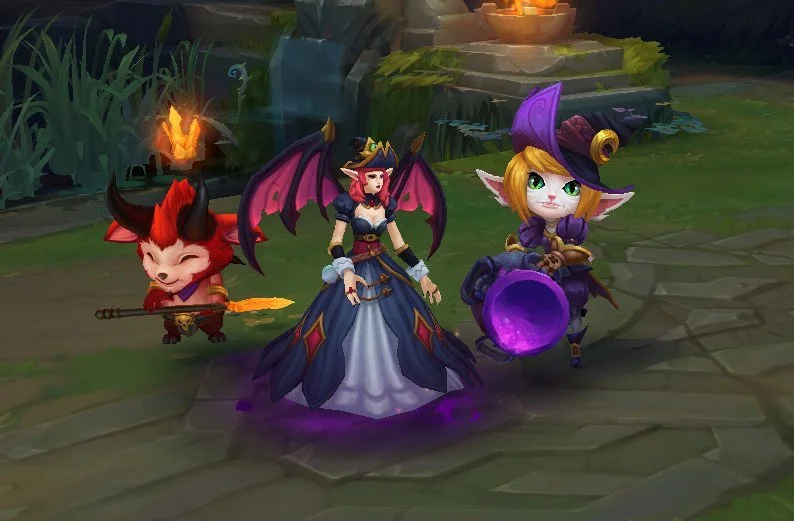 The Meaning Behind Bewitching Tristana

Why is Bewitching Tristana Meaningful?

While there’s not an obvious historical or ‘real-world’ inspired meaning behind the skin, it’s certainly meaningful to the spirit of Halloween! Halloween is both a time to be whoever you want to be, but also a time where you’re accepted for who you want to be! With that in mind, Tristana’s massive smile almost nods at the idea of being excited to show off her outfit to the world!

Why Does Tristana Have a Bewitching Skin?

There is no publicly provided reason behind Tristana being a part of the Bewitching skin line, but many players consider her explosive and delightful personality to be congruent with the events themes, and she certainly fits the style well!